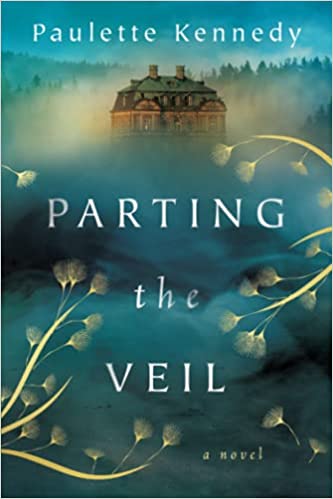 I’m thrilled to introduce fellow author Paulette Kennedy, whose debut novel Parting the Veil (published Nov. 1) has been receiving a lot of attention and positive reviews. It also shot to the top of the Amazon bestseller lists as soon as it was released!

I first became aware of Paulette on Twitter when I noticed she had a novel releasing within a week of The Curse of Morton Abbey. When I realized both of our novels were gothics, I reached out to her to find out if she was interested in cross-promoting our work. And now that I’ve started reading her book, I’m enjoying the similarities between our novels: they both begin with mysterious letters that lead our heroines on journeys to new locations that are packed with secrets—classic gothic openings!

Clarissa: Paulette, thank you for taking the time to chat with me about your novel during what I know has been a whirlwind month for you. What appeals to you most about the gothic genre?

Paulette: There’s so much I find appealing—from the atmosphere and aesthetics within gothic fiction to the themes and subject matter. It feels like a limitless playground! From the time I was a young girl, I was drawn to dark stories, cemeteries and old houses, paranormal subject matter, and questioning the nature of spirituality and the mysteries surrounding what happens after death. Gothic fiction gives us an opportunity to explore some of those wider themes—and it’s also just good fun. There’s a great deal of “camp” within gothic romance especially, and I’m not afraid to embrace the heightened emotions and drama as well. I think readers like myself—who read the genre voraciously—have a certain expectation. I love providing those derivative, traditional elements while also subverting tropes to appeal to a more modern audience.

Clarissa: What gothic novels have influenced you the most? What makes them so compelling for you personally?

Paulette: Daphne Du Maurier is my idol, so all of her work is in some way influential over my own. My Cousin Rachel is my favorite out of all her novels, and I find it so compelling because throughout the novel, we see Rachel through Philip’s eyes—first as an object of suspicion and fear, and then as an object of desire, and eventually, contempt. Philip’s objectification of Rachel tells us so much about the patriarchal misogyny that plagued the Victorian era and was still widely rampant during the time in which Du Maurier was writing. Du Maurier is very cheeky and sly in how she exposes Philip—even the title “MY” Cousin Rachel is a hint at what’s to come. I feel as if Rachel only wants to be respected and appreciated for the woman she is—not the demure angel the men in her life expect her to be. Her character is a fully-realized modern and sexual woman who knows herself, yet feels the unfair limitations of the society she inhabits all too keenly. It’s a powerful book.

Clarissa: I agree! Female characters in gothic novels have traditionally played the part of passive victims (cue the “women running from houses” book covers popular in the 70s and 80s!). How have you updated the gothic heroine for a modern audience?

Paulette: With agency. So much agency. From the very first pages of Parting The Veil, I make it very clear that it’s Eliza’s choice to be in England to create a life “written by her own hand.” Even though some of her autonomy wavers momentarily in deference to the plot—we have to have our plucky heroines challenged by their circumstances at some point, after all—her will to survive and claim some manner of independence is strong. This is a woman who won’t go down without a fight, and I poured a lot of my own struggles with surviving abusive relationships and recovering from codependency into her characterization.

Clarissa: One of my favourite themes to write about is feminism. What do you see as the link (if any) between the gothic genre and feminism?

Paulette: There are so many, especially when written by women. Women’s contributions to the genre in the late nineteenth and twentieth centuries are especially notable. Shirley Jackson, Du Maurier, Charlotte Perkins Gilman—they all explored themes of feminism and misogyny. Through their stories, they passed righteous and subversive judgment on the patriarchal conventions of the day. And now, we see even more intersectional feminist thought emerging within the genre through BIPOC and LGBTQIA+ voices. But even before feminism became more obvious in gothic fiction, it was always there, even in the penny dreadfuls and pulp versions of the genre. After all, why is that woman running from that house? Because of what the house truly symbolizes—a life spent in self-denial and deference to patriarchal constructs. The fact that she’s fleeing at all demonstrates some evidence of rebellion and self-preservation. The common trope of forced captivity—putting the “hysterical” woman away, whether that’s in an institution or a room with yellow wallpaper, and even eventually, perhaps lobotomizing her—are all symbolic of the way in which patriarchal culture seeks to maintain privilege and control over women’s bodies, minds, and sexuality. Gothic fiction and feminism are so intertwined, I would argue, that the two are nearly inextricable.

Clarissa: We are very much on the same wavelength! I’d love to know what you are working on now.

Paulette: I’m currently revising my second novel, which is a dual timeline narrative about a family of hedge witches/granny women in the Ozarks—set in 1881 and 1931. It’s a little bit Alice Hoffman and a little bit Shirley Jackson and quite different in style and voice from Parting The Veil. It’s a true southern gothic with heavy undercurrents of religious oppression and a strong feminist lean. This one has been a real challenge to write, as it was my pandemic book, but I’m very proud of the way it’s coming together, and I’m hoping it will find a home with my publisher!

The giveaway runs from November 5th-12th. It ends at midnight, Pacific Time, on November 12th. The winner will be chosen randomly and announced at noon Pacific Time on November 13th. The contest is open to residents of the U.S. and Canada who are 18 years and older.

UPDATE: THIS GIVEAWAY IS NOW CLOSED. CONGRATULATIONS TO THE WINNER OF PAULETTE’S PRIZE PACKAGE, TANYA P.!

To read my interview and see the giveaway rules for a chance to win a signed paperback copy of The Curse of Morton Abbey, visit Paulette’s blog. 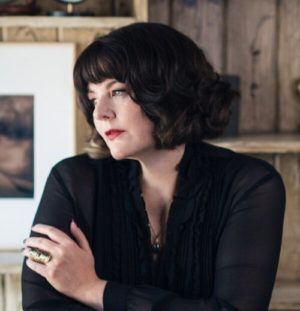 Originally from the Missouri Ozarks, Paulette Kennedy now lives with her family and their menagerie of pets in a quiet suburb of Los Angeles. In her free time, she enjoys tending to her garden, knitting, and finding unique vintage treasures at thrift stores and flea markets.

As a history lover, she can get lost for days in her research—learning everything she can about the places in her stories and what her characters might have experienced in the past. This dedication to research infuses her world-building with realistic detail, and creates a cinematic, immersive experience for the reader.